After a sharp recovery in growth in 2021, which brought the country's GDP back to its pre-pandemic level, activity should remain robust but will decelerate in 2022. It will continue being supported by household consumption (68% of GDP). The excess savings accumulated during the crisis following the COVID-19 pandemic, estimated at more than USD 2.5 trillion, and the rise in wages in a context of tight labour market (unemployment rate at 3.6% in the first quarter of 2022), should support pent-up demand for services. Nevertheless, inflation, at its highest level in several decades, should erode household spending. While it should moderate by the end of the year in the wake of goods prices (especially durable goods), it will remain well above the Federal Reserve's (Fed) 2% target. Inflationary pressures will then be sustained by rising prices for services, and the spillover from the war in Ukraine on energy and food prices. Furthermore, they are prompting the Fed to tighten monetary policy more aggressively. In addition to an initial 25 basis point rate hike in March 2022, the U.S. central bank's latest projections suggest an additional 150 basis point rate hike by the end of the year, which would bring rates close to 2%. In addition, the Fed is expected to begin reducing its balance sheet (nearly 40% of GDP), which has doubled with the asset purchase programmes implemented in response to the pandemic. The monetary tightening should thus curb household and business spending. Rising borrowing costs are expected to result in a cooling of the housing market, after a boom following the first wave of the pandemic. Despite less favourable financial conditions and lower margins due to higher input costs, business investment will continue to be driven by the strong incentive to replenish inventories that were depleted by supply chain disruptions. The infrastructure plan enacted in November 2021 should also begin to support public investment. Targeting mainly transport infrastructure, it calls for USD 550 billion (2.5% of GDP) of new spending over the next decade. However, the fiscal impulse will remain negative due to the withdrawal of pandemic relief. Although weakening, domestic demand, due to its high import content, is expected to generate a negative contribution of foreign trade to growth.

Twin deficits remain higher than before the pandemic

In 2022, the government deficit will continue to decline but is expected to remain high. The change in the deficit will be mainly due to the withdrawal of most of pandemic relief, while economic activity will allow for an increase in tax revenues. However, the decrease in spending will be limited by the ramping up of the infrastructure plan. In addition, a slimmed-down version of the Build Back Better Act (BBBA) social and environmental spending plan, with an initial value of USD 1.7 trillion, could still be approved before the midterm elections in November. While public debt is high, and despite rising interest rates, interest payments (1.6% of GDP at the end of fiscal year 2021) will remain low. Moreover, the country enjoys unparalleled financing flexibility through its status as issuer of the USD, the world's main reserve currency.


In 2022, the current account deficit will remain large, mainly driven by a large trade deficit (4.7% of GDP). Domestic demand and business inventory rebuilding will continue to drive imports. The surplus in the services account (0.9% of GDP) could gradually increase with the return of foreign tourists following the easing of travel restrictions. The positive primary income balance (1% of GDP) is expected to rebound with increased profit repatriation from multinational companies. The transfers deficit will remain stable at around 0.6% of GDP. The attractiveness of U.S. assets and the USD is generating the capital flows to finance the deficit.

Another divisive campaign on the horizon for the 2022 midterm elections

Democrat Joe Biden became president in January 2021, after a tumultuous transition marked by the 6 January assault on the Capitol by supporters of his predecessor, Republican Donald Trump. The passage of a massive USD 1.9 trillion stimulus package, the American Rescue Plan (March 2021), and the infrastructure investment plan are the main legislative achievements of his first year in office. The BBBA has, however, been hampered by dissent within the Democratic Party, which has only a narrow majority in both houses of Congress. The approach of the 2022 midterm elections, which will bring all 435 seats in the House of Representatives and 35 (out of 100) in the Senate back into play, may help to foster a compromise. While these midterms usually result in seat losses for the party of the incumbent President, a majority in at least one of the two chambers appears likely to swing in favour of the Republicans. The political environment remains highly polarized between the two major parties. The foreign policy focus has shifted to Russia following its invasion of Ukraine. The United States has coordinated its sanctions against Russia with its western and NATO partners, particularly in Europe. These actions are in line with the Biden administration's effort to return to a multilateral approach and re-engage with traditional partners. The war in Ukraine and its impact on energy markets has also intensified pressure on the Iran nuclear deal talks that have been revived by the current administration. Concomitantly, tensions with China remain high, particularly on the contentious issues of Chinese trade practices and intellectual property protection.

Exporters should pay close attention to sales contract clauses on the respective obligations of the parties and determine payment terms best suited to the context, particularly where credit payment obligations are involved. In this regard, cheques and bills of exchange are very basic payment devices that do not allow creditors to bring actions for recovery in respect of “exchange law” (droit cambiaire) as is possible in other signatory countries of the 1930 and 1931 Geneva Conventions on uniform legal treatment of bills of exchange and cheques.

Cheques are widely used but, as they are not required to be covered at their issue, offer relatively limited guarantees. Account holders may stop payment on a cheque by submitting a written request to the bank within 14 days of the cheque’s issue. Moreover, in the event of default, payees must still provide proof of claim. Certified checks offer greater security to suppliers, as the bank certifying the cheque thereby confirms the presence of sufficient funds in the account and makes a commitment to pay it. Although more difficult to obtain and therefore less commonplace, cashier’s checks – cheques drawn directly on a bank’s own account – provide complete security as they constitute a direct undertaking to pay from the bank.

Bills of exchange and promissory notes are less commonly used and offer no specific proof of debt. The open account system is only justified after a continuing business relationship has been established.

Transfers are used frequently – especially via the SWIFT electronic network, to which most American banks are connected, and which provides speedy and low-cost processing of international payments. SWIFT transfers are particularly suitable where real trust exists between the contracting parties, since the seller is dependent on the buyer acting in good faith and effectively initiating the transfer order.

Since the American legal system is complex and costly (especially regarding lawyers’ fees), it is advisable to negotiate and settle out of court with customers wherever possible, or otherwise hire a collection agency.

The judicial system comprises two basic types of court: the federal District Courts with at least one such court in each state and the Circuit or County Courts under the jurisdiction of each state.

If the debt is certain and undisputed, US law provides for a “summary judgment” procedure, where a motion for summary judgment is based upon a claim by one party that all necessary factual issues are settled or that no trial is necessary. This is appropriate when the court determines there are no factual issues remaining to be tried, and therefore a cause of action or all causes of action in the complaint can be decided without a trial. If the judge decides that there are facts in dispute, the court will deny the motion for summary judgment and order a trial.

The vast majority of proceedings are heard by state courts, which apply state and federal law to disputes falling within their jurisdictions (i.e. legal actions concerning persons domiciled or resident in the state).

Federal courts, on the other hand, rule on disputes involving state governments, cases involving interpretations of the constitution or federal treaties, and claims above USD 75,000 between citizens of different American states or between an American citizen and a foreign national or foreign state body or, in some cases, between plaintiffs and defendants from foreign countries.

A key feature of the American judicial system is the pre-trial “discovery” phase, whereby each party may demand evidence and testimonies relating to the dispute from the adversary before the court hears the case. During the trial itself, judges give plaintiffs and their lawyers a considerable leeway to produce pertinent documents at any time and conduct the trial in general. This is an adversarial procedure, where the judge has more the role of an arbitrator, ensuring compliance with the procedural rules, although more and more practices enhances the role of the judge in the running of the case. The discovery phase can last several months, even years. It can entail high costs due to each adversary’s insistence on constantly providing pertinent evidence (argued by each party), and involve various means – such as investigations, requests for supporting documents, witness testimony, and detective reports – which are then submitted for court approval during the final phase of the proceedings.

In civil cases, the jury determines whether the demand is justified and also determines the penalty to impose on the offender. For especially complex, lengthy, or expensive litigations, such as insolvency cases, courts have been known to allow creditors to hold as liable the professionals (e.g. auditors) who have counselled the defaulting party, where such advisors have demonstrably acted improperly.

Enforcement of a Legal Decision

Domestic judgments in the United States give the creditors additional rights, such as the seizure and selling of the debtor’s assets or the garnishment of their bank account. As a federal state, decisions rendered in one of the country’s states may be executed in another state’s court, provided that the enforcing court considers that it is competent to enforce any judgement.

For foreign awards, each state has its own legislation. Nevertheless, they must be first recognised as domestic judgments. If a reciprocal recognition treaty exists, the requirement is fulfilled. However, in the absence of one, exequatur proceedings aim at ensuring enforcement in domestic court, after verifying the judgment meets certain criteria provided by the state law.

Different state laws can propose out-of court proceedings in order to avoid any formal judicial proceedings, such as the Assignment for the benefit of creditors in the state of California, where a company turns over all of its assets to an independent third party, who liquidates and distributes them to all creditors in an equitable fashion.

Chapter 11 of the American Bankruptcy Code provides a distressed entity with the opportunity to preserve its business as a going concern while implementing an operation of financial restructuring. The debtor can seek to adjust its debt by reduction the amount owed or extending repayment terms. The debtor entity and its management continue to operate the business as the debtor-in-possession. The Bankruptcy Court supervises the proceedings.

According to Chapter 7 of the American Bankruptcy Code, the purpose of these proceedings is to implement an orderly liquidation of the distressed entity. The court-supervised process involves a trustee selling assets and distributing the proceeds to creditors in accordance with the statutory priorities provided in the Bankruptcy Code as well as pursuing available causes of action. The US Trustee appoints an independent interim trustee to administer the case. The interim trustee holds a meeting of creditors after the petition is filed. He is responsible for liquidating the estate’s assets and distributing the proceeds to the creditors. The court supervises the proceedings. State law can also provide different mechanism for liquidation of a debtor’s assets such as receivership. 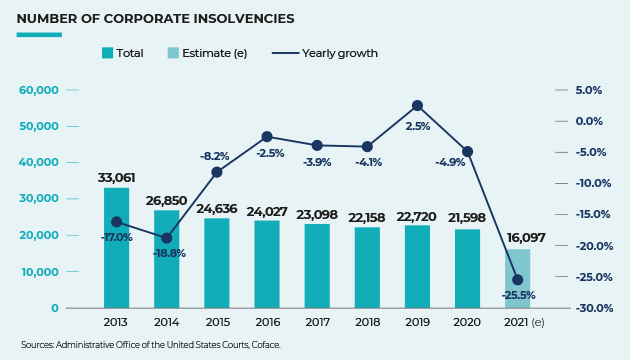