Growth and Profitability in Line with Guidance

Variations in % expressed in comparison with the first half of 2013

Jean-Marc Pillu, Chief Executive Officer of the Group stated: “These results are in line with the guidance announced during Coface's stock market launch a month ago. During the second half of the year we will continue our commercial push, supported by our strategy of innovation and geographical expansion, as well as our effective risk management. We are confident in Coface's ability to continue to deliver on its performance objectives.” 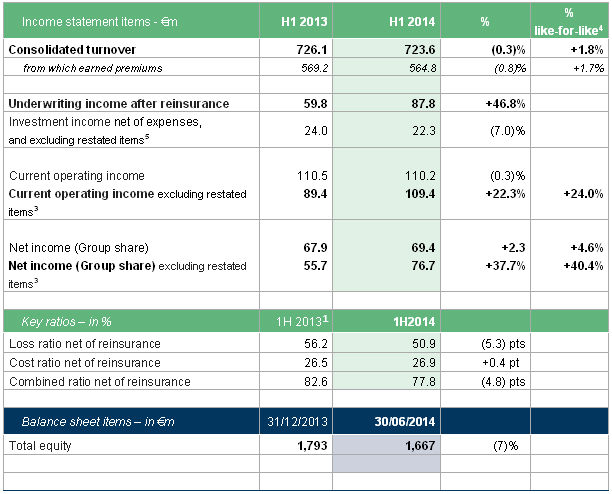 The consolidated turnover of the Group increased by +1.8% on a like-for-like basis and was virtually stable (-0.3%) at current Group structure and exchange rates. This performance was driven by a sales rebound that started in 2013. New contract production was up (+14% compared with the first half of 2013) and the contract retention rate remained high (92.3%) in all regions.

Coface continued to implement its strategy of innovation. EasyLiner (dedicated to SMEs) and CofaServe (Coface service solutions integrated into the client IT information systems were launched in the first quarter, followed by PolicyMaster and CashMaster (two new services that simplify day-to-day management of contracts and access to bank financing.)

The Group's geographical expansion is continuing, as was shown during the first half of the year with the acquisition of a new license in Colombia, the opening of an office in the Philippines and, more recently, the launch of our credit insurance offer in Serbia via a new partnership.

Emerging and North American markets are performing well. The roll-out of new commercial organizations is currently under way, notably in Western and Northern Europe.

Coface continues to control costs and manage its risks effectively, thanks to industrialized processes and a strong local footprint, which allow for support of customers all over the world.

These advances are realized in:

In total, the combined ratio net of reinsurance shows an improvement of 4.8 points[4] at 77.8%.

In order to strengthen its regulatory own funds and optimize its capital structure, Coface issued €380 million in subordinated notes in March 2014.

Following this operation, Fitch and Moody’s affirmed their AA- and A2, respectively, Insurer Financial Strength Ratings, both with stable outlook.

Coface SA total IFRS equity amounted to €1,667 million as of the end of June 2014, after distribution of €227 million in share premium.

The Group confirms the financial guidance for 2014[6] given during its IPO:

[4]    Financial targets based on macroeconomic projections of Coface