Coface Panorama Brazil: No Quick Fix for the Crisis

Global credit insurer Coface has published a new outlook for Brazil. The country, downgraded to B by Coface in September, has been facing a scenario of economic juggling. The Central Bank’s increase in interest rates, to control inflation, has compromised GDP. Lower activity is reducing tax revenues and threatening fiscal adjustment. In addition, the government needs Congress’s backing in order to reach its primary surplus targets, but this support is lacking. Political uncertainties are weighing heavily on the country’s economic performance.

From Boom to Bust

This year was expected to be one of adjustments for Brazil, particularly with regards to inflation and public accounts. Inflation ended 2014 at 6.4%, close to the target ceiling of 6.5%. The reality, however, was worse than the predictions, with even higher pressure on prices and difficulties caused by artificially low fixed prices. Inflation reached 9.49% in the 12 months ending September 2015, mainly driven by a 16.3% increase in fixed prices and the strong depreciation in exchange rates.

Three sectors have been severely affected by the crisis and downgraded from high risk to very high risk:

No Positive Outlook for the EconomyThe country’s public accounts figures have rapidly deteriorated. When the incumbent president took up her first mandate in January 2011, gross public debt stood at 52% of GDP.  As of August 2015, the same indicator is at 65.3% of GDP. 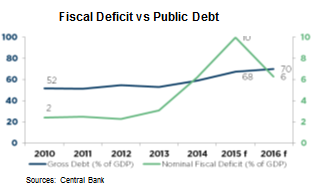 Over the years, Brazil’s government has loosened its commitment to primary surplus by establishing lower targets - and through creative accounting. In 2014 it delivered a primary deficit of 0.6% of GDP, breaking the Fiscal Responsibility Law that was established in 2000. At the beginning of October 2015, the Federal Court of Accounts (TCU) unanimously recommended the rejection of the government´s figures for 2014. This was the first time since 1937 that the TCU has sent Congress an opinion favoring the rejection of government accounts.

Fiscal adjustment is being threatened by lower activity, weak support from Congress and delays by companies in paying taxes. In the 12 months accumulated to August 2015, fiscal deficit stood at 0.8% of GDP.