The economic stagnation from low oil prices is affecting liquidity conditions across Gulf Cooperation Council (GCC) countries, according to a study released by global credit insurer Coface. Government revenues have slowed, liquidity in the banking sector is tight, funding costs are higher and economic growth has dragged to a 2.1% forecast for 2017.
Interbank rates have increased and money supply has slowed across the region. This situation has been particularly concerning for Oman and Bahrain, which have the lowest fiscal and external buffers in the region. This means that tightening liquidity conditions have had a deeper impact for corporate financing in these two countries compared to stronger economies such as the UAE and Saudi Arabia.
Overall, GCC region loan growth is expected to register a solid growth of 4.9% in 2017. But this is far lower than the average annual growth of 9.2% recorded between 2012 and 2016.
Seltem Iyigun, Coface economist, commented: “Restricted resources will make banks more selective in granting loans in 2017 and 2018. This would also limit access to funding for corporates, especially for small and medium-sized companies, as they represent higher risks.”

Oil prices declined over 75% between mid-2014 and January 2016 and since then, have risen back by about 85%. The lower prices have resulted in deteriorated financial and business conditions in many countries, leading some governments to adopt austerity measures that include cancelling low priority projects, raising administrative fees, and curbing subsidies.
Massimo Falcioni, CEO for Middle East Countries at Coface, said: “Bank funding costs have increased due. US interest rate hikes have invariably affected the UAE dirham as it is pegged to the dollar. Capital adjustments are necessary due to the recently implementation of Basel III requirements that require banks to hold a significant amount of high quality liquid assets in 2018-2019.”
The heavy dependence on oil has dragged down government fiscal revenues in many countries across the region. Reduced public spending in 2017 will lead to the postponement of projects, make cash flow management more difficult for companies, and reduce the opportunities for banks to finance mega-projects, which are among their main sources of profitability. 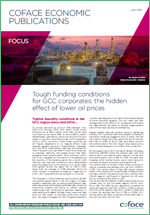