◦ All regions positively contributing to growth
◦ Growth of premiums at 7.1% in Q2-2019, at constant FX and perimeter, continues to be supported by past client activity and high retention

◦ One-off positive impact of  €3m, linked to the integration of PKZ (badwill)2

◦ Coface submitted for validation its partial internal model, in line with its objectives
◦ The objectives of the second pillar of Fit to Win (capital efficiency) have been reinforced

“The first half of 2019 confirms the relevance of our strategic Fit to Win plan. The risk management measures we have put in place are bearing fruit within the context of a decelerating economic environment. We have registered a comparative like for like growth of 6.6%. Commercial activity has seen a return to growth in new business. In the second quarter, during which we recorded the highest net income since we launched the plan, we also successfully integrated PKZ, now known as Coface PKZ.
Finally, today we submitted our partial internal model with the French insurance regulator. This is the result of a major strategic project for numerous teams within Coface. If validated, it will permanently align our regulatory capital requirements with our risk portfolio. It could also mark an important step in our target to improve the capital efficiency of our business model.”

The Board of Directors of COFACE SA examined the consolidated financial statements at 30 June 2019 at its meeting of 25 July 2019. The Audit Committee, at its meeting on 24 July 2019, also previously reviewed them. These interim consolidated financial statements have been subject to limited review by the statutory auditors. The limited review report is being issued. 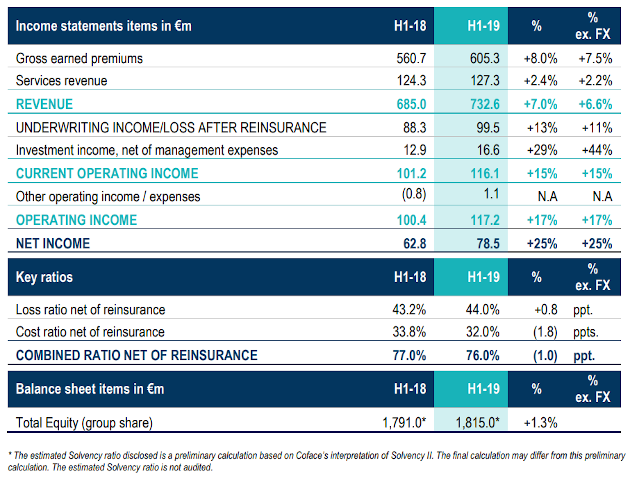 Coface recorded a consolidated turnover of €732.6m during H1-2019, a rise of 7.0% in reported figures. At constant FX and perimeter, this represents a growth of 6.6% compared to H1-2018. During the second quarter, turnover included revenues of €3.5m from Coface PKZ.
Coface’s turnover is continuing to benefit from growth in the past activities of its clients. This growth effect is, however, at a slower rate when compared with the record year of 2018 (+2.1% vs +3.4% for H1-2018). Although pricing is still negative at -1.1%, it recorded its smallest decline in recent years. It is noteworthy that certain key markets recently returned to positive pricing dynamics, despite the fact that claims continue to be contained. This is in line with a growing perception of economic risk.
Client retention remained high throughout the regions and stabilised at a record high of 93.0% for the Group. New business at €65m (up 4.5%), confirmed the recovery reported in the first quarter.
Turnover from insurance activities (including Bonding and Single Risk) progressed by 7.5% at constant FX and perimeter, compared to H1-2018 (a rise of +8.0% at current FX and perimeter). All the regions contributed to these positive dynamics, thanks to continued growth in the activities of our clients and, once again, a high rate of client retention.
Turnover from other activities (factoring and services) were down (1.6%) vs H1-2018.

In the Northern Europe region, turnover progressed by +2.6% (+2.8% at constant FX). Driven by strong client retention and new business growth, credit insurance confirmed its rebound within a pricing environment that has become less negative. Factoring recorded a slight deceleration.
In Western Europe, turnover rose by +3.0% (+2.7% at constant FX), supported by client retention, the signing of a number of major contracts and good performance from bonds and services.
In Central and Eastern Europe, revenues rose by +6.6% and by +2.0% at constant FX. This growth is mainly due to the integration of Coface PKZ. Factoring revenues are increasing in Poland.
In the Mediterranean and Africa, a region which is driven by Italy and Spain, turnover grew by +3.4% and by +4.6% at constant exchange rates. This was supported by growth in policyholder activity.
In North America, reported turnover grew by +17.1%, but by +10.1% at constant exchange rates. Despite the strong currency effect, the Group has stabilised its portfolio. The increase in activity is mainly due to major new contracts and increased client retention.
Emerging markets reported strong growth rates. Revenues in the Asia-Pacific region were up by +27.6% at current FX and by +21.2% at constant FX. Excluding certain non-recurring items during the first quarter, the growth rate was +11.5%.
In Latin America, turnover grew by 17.6% at current FX and by 33.8% at constant FX. These figures were affected by the existence of local policies expressed in international currencies. Excluding this technical effect, growth was 27.2%, driven by the signing of major global contracts and lower premium rebates.

The gross loss ratio was 40.9% for H1-2019. This shows an improvement of 1.5 ppts compared to the previous year. In Q2-2019, the gross loss ratio showed an improvement of 3.1 ppts compared to Q2-2018 (41.9% vs 45.0%).
The Group’s reserving strategy remains unchanged. Strict management of past claims enabled the group to record 37.8 points of recoveries during the semester. These levels remain well above the historical average. They particularly benefitted from good recoveries on major claims recorded in previous years, some of which were heavily reinsured (facultative). On the other hand, opening year reserving is at a particularly high level (76.0%) due to significant provisions in Western Europe, particularly on a large case. Claims frequency is slightly higher, driven by a few countries (notably Germany), although the average cost of claims is lower.
The net loss ratio is at 44.0%, representing an increase of 0.8 point compared to H1-2018. This is mainly due to high reinsurance rates on files that resulted in significant recoveries.

Coface is continuing its policy of strict cost controls and investments. In the first half, costs rose by 3.7%, but by 3.1% at constant FX and perimeter. Coface PKZ's contribution to costs for the quarter is €1.7m. Investments in strategic projects during the first half amounted to €3.3m.
Operational leverage enabled the net cost ratio to fall by 1.8 ppts, down from 33.8% in H1-2018 to 32.0% in H1 2019.

Net financial income for the H1-2019 period was €16.6m, up €3.7m over one year. The accounting yield on the portfolio, excluding capital gains and depreciations, showed a slight increase at 0.9% (0.8% in H1-2018), despite an environment of declining interest rates. The group is now fully benefiting from its increased allocation in real estate.
The financial result is affected by the rise in the markets, which reduced the value of the hedging. This value adjustment is incorporated in the income statement (a negative impact of €5m over the semester). The financial result is also affected by depreciations in equity investments, particularly in Peru following the decision to reorganize operations in the country.

Operating income amounted to €117.2m for the first semester, up by 16.7% compared to the previous year. This was mainly driven by revenue growth and a lower combined ratio.
The effective tax rate fell to 29%, compared to 32% in H1-2018. This was supported by the return to better fortunes of emerging markets.
In total, net income (group share) amounted to €78.5m, of which €42.2m was in Q2-2019. This represents the highest quarterly result since the launch of the Fit to Win plan.

As at 30 June 2019, shareholders’ total equity was €1,814.8m, representing a rise of €8.5m, or +0.5% (vs €1,806.3m at 31 December 2018).
These progressions are mainly due to the positive net income of €78.5m and the increase in unrealised capital gains, which were almost offset by the dividend payment of €119.4m.
The annualised Return on Average Tangible Equity (RoATE) stood at 9.6% as at 30 June 2019. This was mainly thanks to improvements in the technical result.
The solvency ratio reached 162%[1], above the target range of 140% to 160%. This progression can be explained by a growth in capital requirements, in line with the growth in activity and an increase in regulatory capital, due to good profitability and an increase in unrealised capital gains.
In addition, Coface is announcing that it has submitted its partial internal model with the French insurance regulator, in line with its objectives. If validated, this model will enable the improved alignment of regulatory capital requirements and Coface’s portfolio.

The complexity of the international environment has not abated over the past quarter. The lack of significant progress in talks between China and the United States has been accompanied by the weakest growth in China for many years. The appointment of a new Prime Minister came at a time when UK economic indicators are deteriorating. Finally, it has been difficult to build consensus on leadership within the European institutions. Central banks, on the other hand, confirmed their accommodative bias, leading to a further sharp easing of interest rates. At sectoral level, the distribution and the automotive sector have made little progress in resolving their long-term strategic difficulties.
Within this environment, Coface continues its development with an unchanged risk policy. In this context of a progressively slowing economy, targeted opportunities have emerged, in certain sectors and countries, to underwrite business at rates more consistent with the underlying level of risk. This demonstrates the relevance of an agile organisation and consistency in our approach to risk.
The partial internal model has been filed with the French insurance regulator. The objectives of the second pillar of Fit to Win (capital efficiency) have been reinforced.
Finally, all the objectives of the Fit to Win plan are on track to be delivered.