Poland Insolvency Report: Insolvencies and restructuring proceedings still on the rise, despite a robust economy

Proceedings up by +14%, affecting most sectors

Poland’s corporate sector is benefiting from an acceleration in economic activity. This is a reversal of last year’s situation, when the pace of economic growth was weaker. Poland recorded GDP growth of 3.8% in 2015, before falling to 2.7% in 2016. This was due to a slow start to the new programming period for EU funds, which contributed to a slump in fixed asset investments. GDP growth is now regaining strength and reached 4.0% y/y in the first half of 2017. Investments have started to rebound due to both infrastructural projects, supported by EU co-financed projects and increased corporate capacity. Nevertheless, household consumption remains the biggest driver. Poland is enjoying another year of improvements in the labor market. The unemployment rate continues to break previous record lows and fell to 4.7% in August 2017. This is significantly lower than the EU average of 7.6%. Wages are also continuing to rise. Since 2014, wages had already attained a solid growth rate of at least 3% a year. Moreover, Polish households are enjoying the lowest central bank interest rates in history. As a result, domestic demand, along with stronger exports supported by strengthening global trade dynamics, will keep Poland’s GDP growth at solid levels over the next few quarters.

Despite Poland’s robust economic expansion, insolvency and restructuration proceedings increased by 14% in the first three quarters of 2017 (compared to the same period last year).

“Amendments to insolvency laws have been one of the reasons – but not the only contributing factor”,says Grzegorz Sielewicz, Regional Economist Coface Central & Eastern Europe. “Lower profitability, intense competition, pressure on margins, payment backlogs and labour shortages have also become constraints that often result in a squeeze on companies’ liquidity”.

The sectorial breakdown shows that nearly all sectors experienced a greater number of proceedings during the first three quarters of 2017. The rising popularity of restructuring procedures recorded on a general level this year can also be applied to sectors. The highest number of insolvencies and restructuring proceedings occurred among production companies, whose share accounted for almost 28% of all those recorded.

Coface forecasts a GDP growth of 3.9% this year, with a slower 3.5% expected in 2018.The country’s positive economic activity will be a boost for companies - but the first signs of an overheating economy, such as supply constraints and labor shortages, will bring new challenges for companies and the pace of expansion.

Over the next few quarters, statistics will continue to be affected by the legal changes implemented last year. Coface forecasts that the total number of insolvency and restructuring proceedings will be 8% higher at the end of 2017 than in 2016, with a total of 820 cases. The robust GDP growth rate will be fueled by a stable increase in household consumption, a rebound in fixed asset investments and the business activities of Polish companies on foreign markets. Over the course of next year, the number of restructuring procedures will show a slight increase, while insolvencies will continue on a downward trend. Coface expects that the total number of insolvency and restructuring proceedings will decrease by 0.7% during the course of 2018. Retailers will continue to benefit from solid household spending, but intense competition and pressure on margins will affect many entities, particularly the smaller ones. Although the trade sector is enjoying a favorable environment, thanks to robust private consumption, it will also remain a fixture in the insolvency and restructuring statistics. 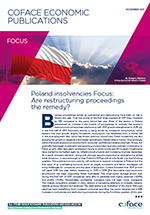