Two pitfalls for businesses in 2019: the economic downturn and political risks

Coface will be sharing its vision of the major trends in the world economy in 2019 with businesses at its annual conference on country and sectoral risks.

An increasing number of pitfalls, such as escalating political risk, the high volatility of commodity prices, and supply constraints, began to slow world growth in late 2018 and cast a shadow over the outlook for 2019 (3 % in 2019, after 3.2 % in 2018 and 2017). This time Western Europe, , has weakened before the United States, contrary to previous reversals in economic trends. Coface expects the number of business insolvencies to increase in twenty European countries (out of 26 analysed) - by +1.2 % in the eurozone and +6.5 % in Central Europe. This increased credit risk for businesses stems from a cyclical slowdown and persistent political uncertainties.

Theautomotive sectoris particularly affected. After a growth cycle of about eight years, it is now showing signs of slowing. The need for investment, increased competition, changing lifestyles of consumers, and the necessary adaptation to new anti-pollution environmental standards must be achieved in the context of a Chinese market reaching maturity, and growing protectionism. These developments have pushed Coface todowngrade the automotive sector tomediumrisk in almost all Western European countries as well as Central and Eastern Europe,andtohigh riskin Latin America and North America.

Political risk will remain an issue in Europe in 2019. Coface's social risk indicator is at its highest since 2010. These risks often become manifest during elections, and elections in Greece as well as possible early votes in Italy, Spain, and Germany should be kept under watch. Spreading social discontent and the increasing popularity of anti-European parties are becoming sufficiently significant that they are set to lead to a very fragmented European Parliament following European elections in May 2019.

‘For the first time since the sovereign debt crisis in 2011-2012, businesses need to navigate through two pitfalls at the same time this year: the cyclical slowdown and political risks’, said Julien Marcilly, Coface Chief Economist.

This global environment has contrasting effects on emerging economies. The slowdown in growth in the eurozone (+1.6 % forecast for 2019) and the United States (+2.3 %) exposes emerging markets to contagion effects, primarily through trade flows. As such, growth in world trade is expected to continue to slow this year (Coface expects only +2.3 % this year). However, the dampening of growth in the United States also has a positive effect: by making interest rate hikes by the US Federal Reserve less likely, the risk of capital outflows from emerging markets is limited.

Numerous political risks will have to be monitored this year in the emerging world, including in Africa, where people now have more means to express their frustrations (internet access rate has tripled since 2010) in the context of a heavy electoral calendar (including Nigeria, South Africa, and Algeria).

However, despite the fragile political and security situation, Coface notes a more favourable outlook forMozambique(now D), the foreign exchange reserves of which are at their highest since 2014 and growth exceeds 3 %, andRwanda(A4), where the business climate is constantly improving and the momentum for reform has been maintained.

Coface is upgrading the country assessments of oil-dependent economies with oil prices remaining at a moderate level despite high volatility:Angola (now C), Azerbaijan (B), Canada (A2), the United Arab Emirates (A3), and Trinidad & Tobago (B).

Lebanonis the only country to have been downgraded(now D)so far this year, penalised by persistent economic difficulties. 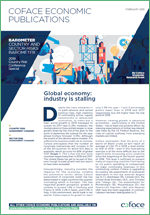 Download this press release : Two pitfalls for businesses in 2019: the economic downturn and politic... (253.12 kB)