The UK automotive sector and Brexit

he UK automotive industry is entering a dry period. The voices of the main UK industry representatives and their concerns regarding the negative effects of a potential hard Brexit appear to remain unheard,  while other difficulties are accumulating against the backdrop of uncertainty. These representatives believe that current negotiations between the UK and the EU are, at this stage, unfavourable to them,  despite the Prime Minister recently emphasizing the country’s will to remain in the Single Market.

The prosperous years of the UK’s automotive industry seem to be a thing of the past. Despite its many advantages, the sector will have to renew itself once again if it is to resist the impact of Brexit. At a time when the automotive sector has to contend with multiple challenges, the prospect of a disorderly exit from the European Union weighs on the capacity of its players to invest and innovate. A weakening of the UK executive adds uncertainty to the future of the sector. 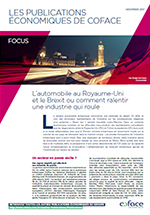 Download this publication : The UK automotive sector and Brexit (582.16 kB)