Turkey: End of the Tulip Period?

Turkey’s economy experienced several shocks during 2015 and 2016. Heightened political uncertainties, regional tensions, the US rate hike process, the credit rating downgrade and domestic security issues, have all resulted in lower tourism revenues, a slowdown in consumer demand, lower appetite from foreign and domestic investors and weaker local currency. These factors have contributed to a slow-down in capital inflows to Turkey – inflows on which the country is heavily reliant for its economic activity. Compounded by global risk aversion and local companies paying their debts in dollars, this environment has caused a sharp depreciation of the lira. This is threatening the payment behaviour of the corporate sector, as well as investment appetite and growth perspectives. Coface expects the Turkish economy to grow by 2.5% in 2016 and 2.7% in 2017.

It should be noted, however, that despite these domestic and external shocks over the last couple of years, the Turkish economy has remained resilient. Manufacturing production continues to edge up on an annual basis, mainly on the back of the economic recovery in Europe, Turkey’s main trading partner. The measures that have been implemented to boost domestic demand are expected to have effects on consumption in the upcoming period. Thanks to its improving relations with neighbouring countries, tourism revenues should start to increase in the second half of 2017. Exports to the EU area are continuing to rise, partially compensating for exporters’ falling profits. Higher public spending will also support economic activity, especially with 2016the recent incentives package aimed at encouraging investments.
Most importantly, the implementation of structural reforms means that a path of sustainable growth in the medium term still looks promising for economy, all the more as the country benefits from a young popu-lation and large domestic market. Although economic growth has slowed, the economy has still been in continuous progression for the last 27 quarters.

After elaborating on this challenging outlook in the first section, the panorama will focus on the retail sector, as it is a good indicator of both domestic demand and the impact of currency risks for businesses. The study will then examine the automotive sector, where domestic sales are edging down, but exports remain fairly strong, on the back of the European recovery. 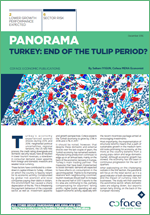