The year-end shows a clear improvement in the North American sector risk. After a short-lived downturn due to the crippling winter conditions in the first quarter, the United States has resumed solid and balanced growth, which is forecast at 2.0% in 2014 and 2.5% in 2015. The favorable economic conditions, along with high company profits and the recent fall in oil prices, have especially benefitted three sectors:

The chemicals section in North American stands out favorably compared to Western Europe, where the recovery is sluggish, and to emerging Asia, where the outlook remains fragile. Industrial production in North America increased by 3.2% in the third quarter of 2014 compared to the previous year, supported by strong activity in the sector’s two major markets - automotive and construction. Automotive sales were up 1.4% in the first 10 months of the year, and activity and prices are up on the construction side, although still without reaching pre-crisis levels.

Encouraged by rising global growth this year, the first since 2010, and the expected acceleration in international trade in 2015, the transportation sector has recorded solid performances. In Europe, air freight has suffered from the effects of the Russian embargo on trade exchanges and strong competition from low-cost airlines, while in North America the sector has benefitted from the positive effects of past restructuring. Even though growth in North America was only 2.8% at the end of September[1], companies there are more profitable than in Europe. In addition, booming growth in the United States has contributed to the resurgence of demand in business and in freight.

The growth in this sector seems to have stabilized in North America, at around 2% annually, with abundant supply and steady demand. Cotton harvests in this region, which is the third largest global producer, could reach 2012-2013 levels with an expected rise of 24% in volume to reach 3.5 million tons[2]. Due to the resilience of American employment and consumer spending, the demand momentum in this sector is relatively favorable compared to Europe.

The weak recovery inWestern Europeand the unresolved overcapacity issues in the sectors connected to infrastructure investment in emerging countries inAsiahave led Coface to leave its sector risk assessments unchanged for these regions.

However, one sector is now being watched carefully -- the distribution sector in Western Europe, which is considered for the moment as a "medium risk." In contrast to emerging countries in Asia and to North America, where the sector is classified under "low risk", the prolonged sluggishness of consumer spending in Europe, combined with the export ban on certain foodstuffs to Russia, are adversely affecting distributors’ margins and are resulting in downward pressure on prices. 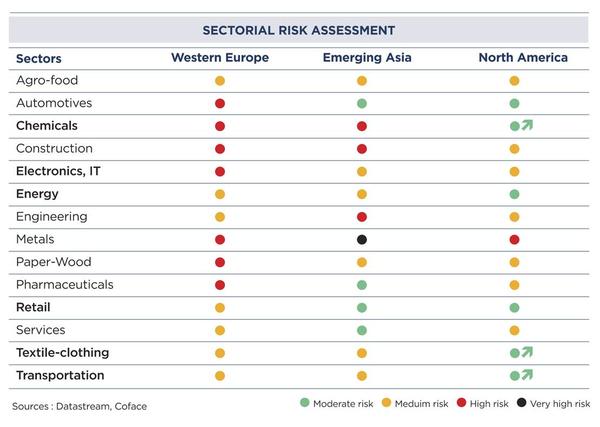